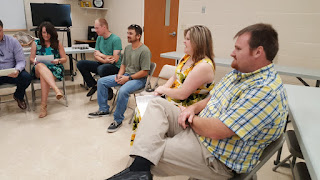 Are you thriving spiritually or are you stagnant? Maybe an easier question is are you a better follower of Christ today than you were this time last year? If not why? What’s holding you back? Are you engaging in what is arguably the most important of all spiritual activities?

As we read the scriptures and even more specifically in Acts 2, we find that believers thrived in community. At Stetson Baptist Church it’s not any different. Research shows that people who are involved in a group environment read their Bibles, pray, give, and serve more than those who are not in a group. Simply put groups are an essential component to spiritual growth. Here at Stetson Baptist Church, we have three different types of groups to engage in:
Sunday School Groups
It is so important to connect with people that can relate or are in the same stage of life, and during our Sunday school hours, it is easy. Every Sunday morning, you can find many groups of people who, like you, are seeking to discover and live out the purposes of God in their lives. Our Sunday School classes are designed to help everyone feel comfortable. We share our burdens, celebrate victories, and offer support. Across all ages, the Sunday groups follow the same teaching plan. This alignment allows parents to talk to their child about their classes knowing that they both talked about the same topic.

Weekday Groups
Relationships are vital to a believer. During the week, groups meet on and off campus to explore God’s word around a dinner table or in a living room. These groups will often study things that are relevant to their life situation. Whether it is a parenting study or exploring a book of the Bible, these groups provide attendees the opportunity for meaningful discussion and interaction with other members of the group.

Short-Term Groups
During the year you will find opportunities for short term groups that study a book of the Bible or a topic. These short-term groups will typically meet for 6-12 weeks and work through a book or a topic of study.
If all you do is come to worship on a Sunday, you are settling for less than God’s best for your life. Get involved and see what God will do in your life. Life change happens best in the context of relationships and being in a group is a great catalyst for meaningful relationships.
Posted by Brad Gwartney at 4:53 PM No comments:

Have you been in prison?

Have you been in prison? I have! It was a class field trip in high school. I remember it like it was 20 years ago, because it was. I was a sophomore, and we visited the Tulsa County Prison. It was everything you can imagine a prison being: loud, smelly, uncomfortable, and it just felt dirty. The thing that impacted me the most was the lack of joy in that building. Nobody was happy. After just a couple hours in that facility, I had a great appreciation for those who work in that environment every day.

Across the world, there are countless numbers of Christians imprisoned because of their faith in Jesus. According to Open Doors, an organization that supports persecuted Christians, North Korea is the most dangerous place in the world for Christians. Of the country’s approximately 25 million residents, 300,000 of them are followers of Christ. Of those, 70,000 are locked away in camps that are described as concentration camps. It’s a place of unspeakable torture. Christians are being crucified, burned at the stake, crushed under steamrollers, herded off bridges, starved, and forced to work in hard labor camps.

The last couple of days there have been many stories about the actions of North Korea’s leaders and the possibility of military action in that country. I don’t know enough about the situation to have an opinion on that issue, but I do know that North Korea is a place where local Christians need our support. The book of Hebrews describes our responsibility in situations like the one in North Korea.

When we hear of stories from the persecuted church, we must remember that the people being hurt are our brothers and sisters in Christ. The pain that they are feeling needs to be understood as if it was our pain. We may not be able to stop the pain from occurring, but we need to support them through it. The following is a story that was published by Open Doors about Hea Woo, a follower of Christ in North Korea.

“As Hea Woo looked into her husband’s cell, she couldn’t believe her eyes. The man before her was hardly recognizable from the torture. He covertly slipped something into her hand that would change her life forever: his profession of faith. Later, she also began to follow Christ and ended up in a cell of her own. Despite being faced with starvation and torture, Hea Woo realized that she had been given an opportunity to share the gospel with those around her. Before long, a number of women in the camp had placed their faith in Christ, and secret gatherings for fellowship began in the prison outhouse. In this, the most unlikely of places, the women silently sang songs of praise, prayed and shared Bible verses with one another. Amazingly, she was later released from prison and managed to flee to South Korea. Her testimony is representative of the many North Korean Christians who suffer in prison camps each year, and serves as a reminder of God’s faithfulness.”

Partner with me in prayer for the believers who are living through persecution. Not just in North Korea but in areas across the world as they suffer for the cause of Christ. Pray for their boldness as they are possibly the only light in a very dark area. Pray that they will have the ability to continue to effectively minister in these continuing difficult times. 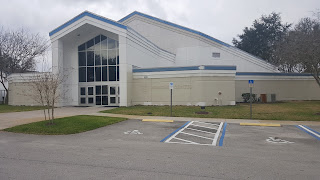 
What would it be like to see God literally fill a church? For the Jewish people of the mid-10th century, this was an everyday reality. The temple was so much more than a building.  It was where they worshiped and celebrated festivals. It was where they offered sacrifices for the atonement of their sins. On top of all that, this was where the glory of God literally dwelled.
Imagine that you lived during this time and you had the opportunity to see all of this. How passionate would you be about that temple? The Scriptures clearly show us how passionate they were. Solomon went to great detail describing how he built the temple. No expense was too great to ensure that God’s temple was befitting His glory. Many thousands of people worked together to build the very structure we can still see today. They were proud of what they constructed and Solomon was proud to see it to completion.
As a believer in Christ, we know that we, “are God's temple and that God's Spirit dwells in,” us. When someone becomes a believer in Christ we should celebrate with the same passion and zeal as the Jews did when the glory of the Lord filled the temple. It needs to be something we celebrate continually and work diligently to make sure everyone can make that same step of faith. 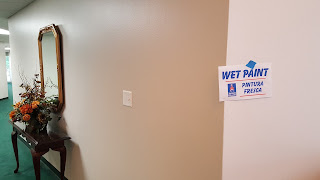 That said, we also can see our church building as a sort of modern-day temple. Our sanctuary is a place that we come to meet with God in the corporate setting of His Body each week. Our church might not be adorned with gold, limestone blocks, or cypress timbers like Solomon's Temple, but we should make sure our campus looks nice especially as we get closer to celebrating the Holy Week leading up to Easter. That is why, this week, we started painting the building. We want to make sure that our church building reflects the awesomeness of the Lord we worship. So, for the next couple of weeks, you will see new paint going on the walls of all the exterior surfaces and the hallway, lobby, and restrooms in the Worship Center. We hope that as people drive by they don’t just see a building but a place that reflects the passion we have for what God is doing in all of us and through this church. Please pray for the painters’ safety and if you see them on campus, try and go out of your way to show them the love of Christ. You never know the difference you could make!

Posted by Brad Gwartney at 12:36 PM No comments: 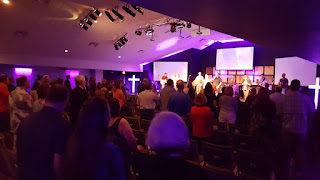 I have some bittersweet news to share with you about what God is doing in my life and my family’s life. The last couple of weeks we have been praying about and seeking God’s will in regards to God calling us to serve at Stetson Baptist Church in Deland, FL. This weekend we visited and we have complete confidence that God has opened the door for us to relocate and begin serving Him there. I wish I could individually tell you all about the tremendous impact you have made not just in my life but my whole family. Your love and support have been invaluable. I could not be any happier with how God has allowed us to partner together to grow His kingdom in NE Tallahassee. This transition was not born out of any conflict or division within the church but has come as a direct result of God’s direction. The leadership of the church has been so supportive. Matt and his family have been such a blessing to us. Matt is an incredibly gifted pastor and a such a close friend and mentor.

January 29th will be the last Sunday I will be on staff at Canopy Roads. God willing, we will move our family to Deland that same week. Thank you again for allowing me to serve alongside you. God’s fingerprints have been all over Canopy Roads since I started in 2008 and I have complete confidence that God will continue to use you and the leadership to develop fully devoted followers of Christ in the years to come.  God bless and thank you!

Brad
Posted by Brad Gwartney at 8:53 AM No comments: